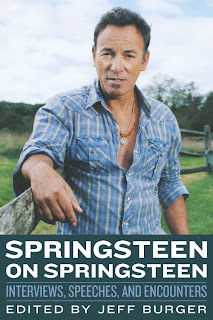 I first saw Bruce Springsteen and the E Street Band perform in 1985 at Soldier Field in Chicago (I had won the tickets from a radio call-in contest), the second year (second year!) of the Born in the U.S.A. tour. The stage was in the football field's end zone, and in my memory, my friend from high school Jim and I were standing on about the 20-yard line at the stage-end of the field, although now I can't believe we actually managed to get anywhere near that close. Wherever we were standing (standing, for three-plus hours), I could see things pretty well, given my height and the presence of huge video screens. Even though by that point the band was playing ten of the new album's twelve songs, eschewing some older classics (where oh where was "Rosalita (Come Out Tonight)"?), it was still an amazing, life-enriching show for me, and for the probably 60,000 other people in attendance.

Here's Springsteen in an unpublished interview from 1974, eleven years prior:


Usually we won't play anyplace over three thousand [people]--that's the highest we want to do. We don't want to get any bigger. And that's even too big....

P[aul] W[illiams]: But then there's The Who. They announce they're playing Madison Square Garden and it sells out in an hour. So I guess they'd have to book a week, a whole week.

BS: You gotta do that. And if you get that big, you gotta realize that some people who wanna see you ain't gonna see you. I'm not in that position and I don't know if I'll ever be in that position. All I know is those big coliseums ain't where it's supposed to be. There's always something else going on all over the room....

PW: I guess people go for the event.

BS: What happens is you go to those places and it turns into something else that it ain't. It becomes an event. It's hard to play. That's where everybody is playing, though, I don't know how they do it. I don't know what people expect you to do in a place like that. Especially our band--it would be impossible to reach out there the way we try to do. Forget it! (pages 34-35)

But Bruce and the band not only fairly soon managed "the impossible"; they became the undisputed, three-hour-plus masters of it, and have remained there for close to four decades.

In Springsteen on Springsteen, editor Jeff Burger allows us to see how Bruce was able to develop from a pretty inarticulate but hungry young artist into one of rock's elder statesmen and most eloquent spokespersons. Burger has gathered interviews, speeches, and more, ranging from a profile from 1973 to Springsteen's keynote address to the South by Southwest Music Festival in 2012. (The book is also peppered with "Bruce Bits," snippets of other interviews that touch on ideas not covered in the full-length pieces.) I've read several books about Springsteen in the past couple of years (most recently Bruce by Peter Ames Carlin), and each have their strengths, but this one does a wonderful job of demonstrating Springsteen's ever-evolving sense of himself as an artist.

His early interviews reveal an incredibly prodigious songwriter who was nevertheless very cautious--even guarded--when it came to how much of his music he presented his music to the public. Later in life, though, he began opening his vaults, beginning with the four-disc set Tracks (1998). There was evidence of this shift in perspective a few years before that, though, such as in this Guitar World interview with Neil Strauss in 1995:


Certainly, I go back and realize that there are many outtakes that should have been released at different times. I still wish I'd put more records out, and maybe I could have. But I made records very purposefully, with very specific ideas of them being about  and representing certain things. That probably caused me to be overly cautious about what I released and what I didn't. I certainly feel a lot more freedom now. (page 200)

It becomes clear when reading the earlier pieces that the feeling of freedom he felt in the 90s came for him only after consciously and meticulously shaping his early career along specific thematic lines.

And for a performer who's now known for his political activism, appearing on behalf of politicians like John Kerry and Barack Obama, he was for a long time reticent to espouse any overtly political rhetoric, although his populist sympathies generally weren't hard to spot in his lyrics. Even in the 1990s, an invitation from then-President Bill Clinton wasn't enough to tempt him, as David Corn inquired in a Mother Jones interview (1996):


DC: The White House wanted you to drop by today, but you chose not to.

Springsteen seems to have avoided many sorts of temptation. Unlike just about every other rock or pop musician you can think of, he never fell prey to the dangers of chemical addiction. Indeed, several early reviews make a point to mention his tea-totaling ways. By the 1990s, though, interviewers occasionally set the set the scene for their pieces with tales of Springsteen offering to share some beer or Jack Daniels, drinks which the performer then barely touches (if at all) for the duration of the interview. Gavin Martin, from the New Musical Express, brought up the subject of drugs in 1996, and Springsteen replied:


I've had a funny experience in that I didn't so any drugs; I've never done any drugs. It's not about having any moral point of view about drugs whatsoever--I know nothing about them.... I didn't trust myself into putting myself that far out of control. I had a fear of my own internal life....

I was 'round very many people who did many drugs and I can't particularly say I liked any of them when they were stoned or high, for the most part. Either they were being a pain in the ass or incomprehensible. That's my experience--so it didn't interest me.

Also, at a very young age, I became very focused on music and experienced a certain sort of ecstasy, actually, through playing. It was just something I loved doing. (page 225)

One of the strengths of this book is that editor Burger didn't just collect old interviews; he also contacted the interviewers and asked for any background stories or years-later comments they might have. One good example is the introduction to Springsteen's Advocate interview with editor-in-chief Judy Weider (1996). In comments to Burger, Weider placed Bruce's rhetoric in a specific political and personal context:


"Probably the most significant contribution made by Bruce in the interview (aside from revealing his own struggle with how he'd really feel if one of his own children turned out to be gay) came when e discussed marriage for LGBTs. It is important to remember that this was 1996; I had the heads of our own gay organizations cautioning me not to push for marriage. 'Civil unions are enough for now. People are not ready.' It drove me nuts. But Bruce not only understood that was an equal-rights issue, he pushed for gays and lesbians not to settle for less in this interview. His clarity and passion gave me extra backbone for my own ongoing fight over the years: '[Marriage] makes you a part of the social fabric. You get your license; you do all of the rituals.... [It's] a part of your place in society and in some way part of society's acceptance of you.'

Again, these later pieces demonstrate a sense eloquence that simply wasn't there in the early days. I recall reading a Rolling Stone interview back in 1984 or 1985 (not included in this book) and wondering more than once how someone who could write lyrics with such directness, power, and beauty could so often speak so hesitantly. How could the man whose poetry I admired be so, well, inarticulate so often? This was before I began doing some writing and public speaking myself, before I learned that my own best self came not through extemporaneous speech but through carefully considered and crafted prose. Revision is the key to good writing, and Springsteen has always been a notorious reviser of his lyrics.

As we see over the course of this collection, Springsteen took revision in all forms seriously, and eventually got to the place where he spoke to reporters not hesitantly but thoughtfully and reflectively, with all of the care and craft his lyrics exhibited. Nick Hornby introduced his Observer Music Monthly interview in 2005 in part by noting:


[Springsteen's] answers came in unbroken yet carefully considered streams. He is one of the few artists I've met who is able to talk cogently about what he does without sounding either arrogant or defensively self-deprecating. (page 313)

In an interview with the actor Ed Norton in 2010, Springsteen channels a filmmaker to give one of the best examples I've read of a description of an artist: "Martin Scorsese said the artist's job is you're trying to get the audience to care about your obsessions" (page 354). And later that year on Australian television with interviewer Ian "Molly" Meldrum, he positioned himself as a particular kind of artist: a storyteller.


If you look at the role of storytellers in communities going back to the beginning of time, they played a very functional role in assisting the community and making sense of experience, of the world around them, charting parts of their lives, getting through parts of their lives. I was interested in the eternal role of storyteller and songwriter and how I was gonna perform that function best. (page 369)

The Bruce Springsteen of 1974, at least the public speaker, never mentioned ideas like this. But did he think things like this? The Springsteen of 2010 says he did. Can we gainsay him that? For an artist whose first two albums especially delighted in the play and sound of words, his interviews--his honest, raw declarations "for the record"--took quite a long time to catch up and become lyrical in and of themselves. Perhaps he needed to hone not just his song-craft but his larger word-craft over time. The young Springsteen's speech strikes us as a bit crude and unfinished; the elder man speaks in sharp-edged, purely forged prose.

Springsteen on Springsteen not only traces the career of a songwriter; it chronicles the development of a thinker. As the imagery in his songs became more direct, more focused on the real world than on flights of verbal fancy and epics of escape, Springsteen's inner life blossomed to the point that his everyday speech could speak of hopes and dreams, of aspirations and heartache, with a beauty and a power and a poetry all its own.  In assembling these interviews spanning nearly four decades, Jeff Burger helps us to build a complex, evolving portrait of a performer, of a human being who grew into being the boss of his own mind. With a Three Philosophers from Brewery Ommegang.

I Don't Just Review Books - I Write for Them, Too!

Take a Peek into My Library